A weekly series of foul-mouthed investigations into empty lots, dead-ass proposals and other design phenomena around Philadelphia. Find more stories like this at Philaphilia.blogspot.com. 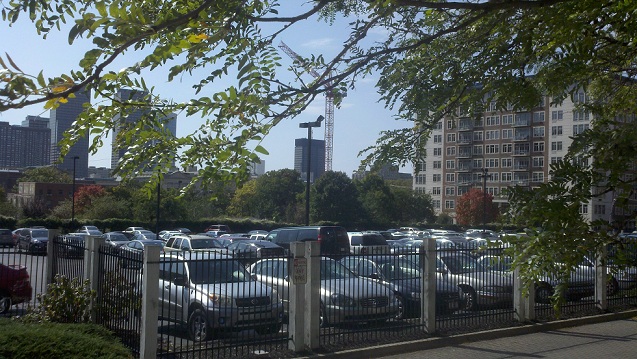 Bounded by 18th, 19th and Buttonwood streets, and Baldwin Park -- This right here is a lot with some really shitty luck. Though a surface lot for nearly 40 years, it still hasn't beaten its own record for long-term emptiness. Now that's fucked up. Though there is some hope for the future of this space, it's currently mired in a shitty shituation.

The neighborhood around this particular block was first developed in the early to mid 19th century, but for some reason, the block stayed empty even as every other block around it was stuffed with buildings. It wasn't until the 1880s that a pair of factories were built on the lot's western side. One made shoes, the other trimming. They would change hands every few decades and stand until the 1970s. The eastern part of the lot would get a row of large houses at about the same time, leaving an empty space in the middle of the block until the 1890s.

Meanwhile, in another part of town, the quickly-expanding Philadelphia Dental College was ready to build a new facility. Founded in 1863, this school was the second oldest of its type in America and was quickly gaining a great reputation among raging mouthmongers. In the mid 1890s, the middle of the 1800 block of Buttonwood Street was pretty much the only empty space left in town. The college commissioned the mega-badass Wilson Brothers to design a new building for them that could conform to the funny piece of land.

The Wilson Brothers came back with a super-thin, long building, only as wide as a standard rowhome, that would hide all the empty space left on the block. Constructed in 1896-'97, this brick and glass sliver would become one of the most respected dental institutions anywhere.

The Hospital of Oral Surgery, which naturally became affiliated with Philadelphia Dental College, renamed itself after its founder, Dr. James E. Garretson, and built a small addition in the hidden middle of the block shortly after the construction of the super-thin Dental College (you can see the roof and cupola of it in the picture above). They combined forces to become one unit called The Philadelphia Dental College and Garretson Hospital for Oral Surgery. In 1905, Temple University took over the College/Hospital, and loved the thin building so much that they moved their colleges of medicine and pharmacy into the space.

In 1907, Temple commissioned super-megatect Horace Trumbauer to design a larger form of the Garretson Hospital section of the building, with a nice facade facing Hamilton Street. It opened in March of 1908.

Temple would later move their School of Chiropody to the complex in 1915. At about the same time, a huge crackdown was occurring nationwide on Dental Schools, since dental work and oral surgery was rife with quackery. The Dental College, now called the Temple University School of Dentistry, would get a "B" rating in the 1910s and 1920s, until getting their shit together to get an "A" rating by 1934.

By the 1940s, the super-thin Philadelphia Dental College building was falling apart and considered beyond repair. In 1943, the Council of Dental Education named it one of the worse facilities in America. In reaction to this, Temple spent $2 million re-purposing an old car factory at Broad and Allegheny and moved the Dental and Pharmacy schools there, abandoning the old Philadelphia Dental College building. The beat-up old structure would be absorbed by Garretson Hospital, which at this point, became more of a dental clinic.

The old super-thin Dental College building would finally be demolished in 1963, leaving an empty space that would be the infant form of the current empty lot.

In the 1970s, the entire neighborhood started its transformation into the failed Franklintown revitalization project. Whole blocks started going down one by one, some not to be rebuilt upon for the next 20, 30, or 40 years. The Shituation Lot would become empty throughout the early '70s and stay that way until the present.

In 1986-1987, the block to the north of the lot saw the construction of Museum Towers (which is just one tower: I hate when they do that). Since then, talk of Museum Towers Phase II occurring on the Shituation Lot has been the stuff of legend ... until now. This past January, Forest City, the gigantic developer that owns Museum Towers, announced that a new 16-story tower would be built on the Shituation Lot. No renderings or expected construction time were offered -- just hope.

Back in January, I scoffed at the idea, but considering how much construction is going on in the city right now, Museum Towers II may be the Shituation Lot's best chance at destruction. Build that shit and put this motherfucker out of its misery once and for all!!