A weekly series of foul-mouthed investigations into empty lots, dead-ass proposals and other design phenomena in Philadelphia. Find more stories like this at Philaphilia.blogspot.com. 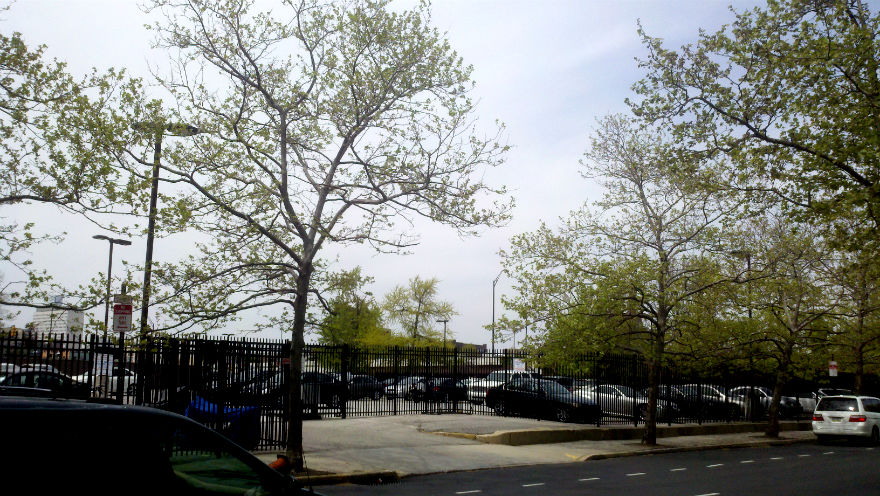 This right here sure turned out crappy. This shitbag surface lot is just one of many in the area surrounding Franklin Square. With endless auto traffic lining its perimeter, this 40-year-old lot will probably never go away. Nonetheless, there is a small glimmer of hope that it might sometime soon.

The first known use of this lot was as a cemetery. The Trinity Methodist Episcopal Church of Philadelphia commanded most of the block bounded by 8th, Race, Vine and Franklin Square for most of the first half of the 19th century. The church itself faced 8th on the southern part of the block and the cemetery filled the rest. Eventually, the church sold off some small pieces along the perimeter of the block, causing buildings (mostly very large houses) to be built along all the street-fronting parcels. Miller's Winter Garden Theater appeared on the Vine Street-facing part of the block in 1854.

After the Civil War, a wave of development hit this neighborhood like a bag of hammers. Between 1865 and 1875 the burial ground was totally removed and buildings filled the entire block. The St. Michael Zion Lutheran Church was the most important building placed here in this era. 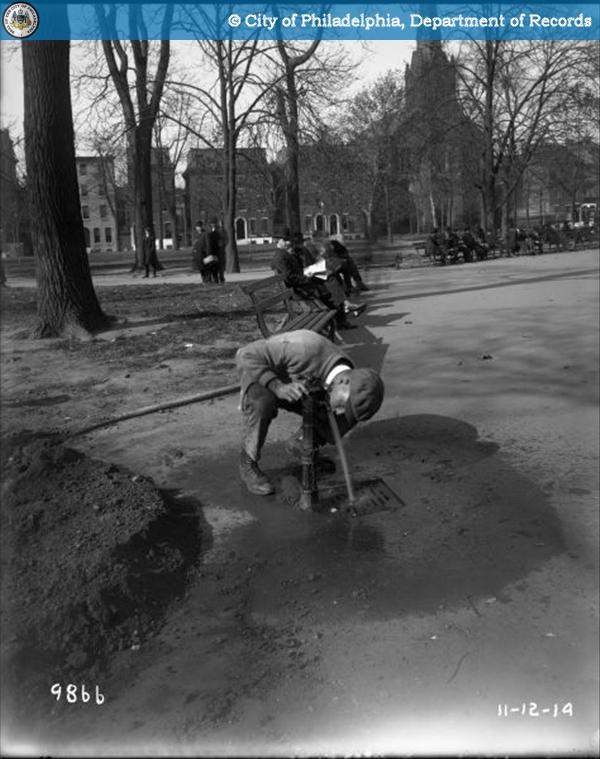 This 1914 view from the middle of Franklin Square shows the buildings built along Franklin Street in the 1860s. The Saint Michael Zion Lutheran Church is on the right. Image from PhillyHistory.org, a project of the Department of Records.

The wave of development in this neighborhood continued for the next four decades. By the end of the 1890s, the 8th Street-facing part of the lot became something of a Theater District. Forpaugh's Theater, Bijou Theater and the Gayety Theater (must have been a happy place) took over the street. Though they started out as legitimate first-run theaters, the strip quickly descended into a bunch of debaucherous burlesque houses. The neighborhood declined quite a bit as well, becoming half industrial/half shitbag residences. 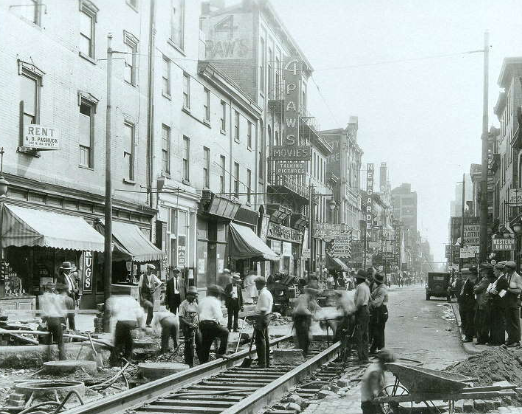 The old Eighth Street theater strip in 1931, at this point movie houses and scumbag burlesque theaters. Check out how Forpaugh's Theater had become the 4 Paws Theater. Image from the Philadelphia Architects and Buildings Project.

In the late 1940s, Vine Street was widened to double its original width, wiping out all the buildings on the southern half of the block (the northern part of the current empty lot). In this location, that included the still-standing Winter Garden Theater. 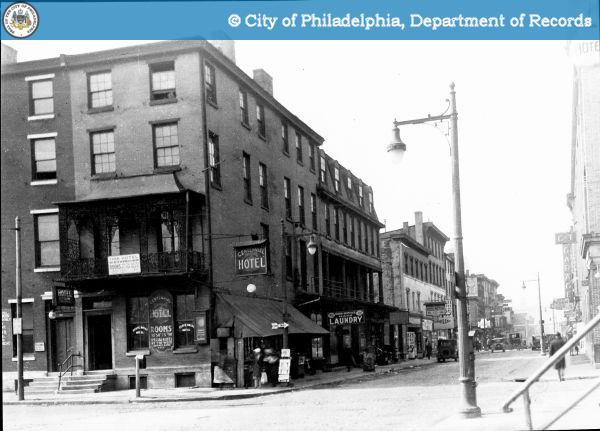 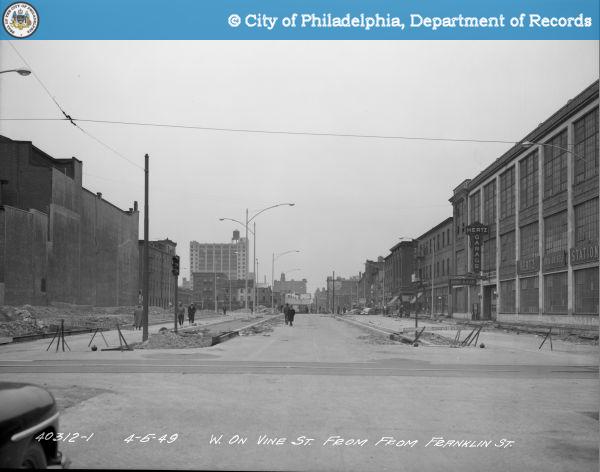 The same location, 1949. That big blank wall was the side of the 4 Paws Theater. (PhillyHistory.org) 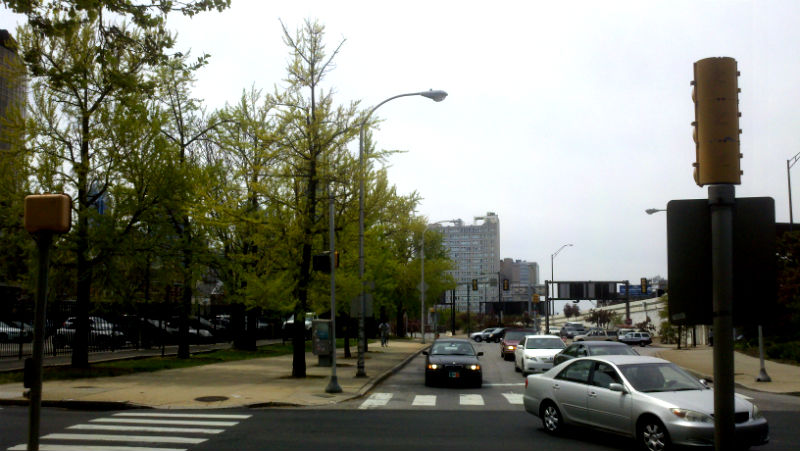 Same location again, 2013. Those rows of trees on the left were planted shortly after the 1949 picture above was taken.

The first version of this shitbag surface lot arrived in 1953 with the demolition of the old Gayety Theater. The void it left behind would serve as an omen for things to come. Mayor Richardson Dilworth saw the area as a place for revitalization. While he championed the revitalization of Society Hill through renovation and re-use of the neighborhood's existing historical fabric, he saw this neighborhood as a place to knock everything the fuck down and start over, even though almost as many 18th century structures still existed here, including some remaining wooden houses.

Though it would be one of the last to go, the block bounded by 7th, 8th, Franklin and Vine Streets was one of the blocks whose buildings would get axed. All of the buildings on the southern half of the block were removed in the late-1960s for the construction of the new Metropolitan Hospital, designed as a shitty knock-off of the Roundhouse, which is a shitty-looking building upon itself.

Even after the Metropolitan Hospital was built, the northern half of the block stayed somewhat intact for a few more years, though buildings started disappearing one by one. The last to go was the old Saint Michael's Zion Lutheran Church in 1973. Once it was gone, the surface lot attained its current size and configuration, serving as the hospital's parking lot.

Over the next few decades, more changes would come to the neighborhood and none were for the better. In the 1980s, the Center City Commuter Connection Tunnel, which was placed underground a block to the west, created a four-block-long empty lot that made this one look like nothing. The Metropolitan Hospital closed in 1992, around the same time that the Vine Street Expressway with associated ramps and shit tore through the area. Now the neighborhood by Franklin Square wasn't just shitty because of empty lots and derelict buildings – massive amounts of auto traffic would become a permanent fixture.

The Metropolitan Hospital's building sat empty and falling apart for 12 years before being totally gutted, re-facaded and converted to condominiums. The surface lot that was the hospital's parking lot became the condo's lot. Now 40 years old, this lot sits adjacent to one of the city's most highly-trafficked corners: Franklin and Vine, where cars congregate from about 75 different directions in order to get on 95, 676, Callowhill Street, or North 7th Street.

Though the future of this lot seems pretty bleak, its not totally forgotten. The Philadelphia Planning Commission's Phila2035 Plan acknowledges this badly planned part of the city. In it, the whole area is to be revitalized in a much smarter way: by having a mix of uses and densities fill in all the voids left over by old urban renewal plans. The only problem with it is this: it keeps this shitty surface lot a shitty surface lot. 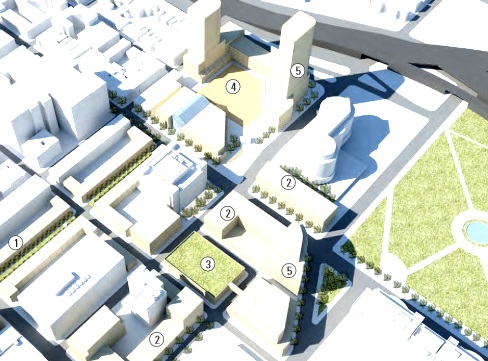 Fuck! Everything's filled in but this lot!!

I understand that it would be difficult to persuade the Metroclub's owners and residents to remove their parking lot and develop the space, but shit, it may end up as the LAST empty lot in the neighborhood! The only hope that exists now is that every other lot in the area gets developed successfully over a short period of time, pushing the neighborhood to capacity. Then the Metroclub's owners would have no choice but to develop their lot in order to reap the benefits of the burgeoning neighborhood. Maybe this fantasy development from the future would include new underground parking for the Metroclub's residents so they won't really lose their parking lot. Don't get your fucking hope up. 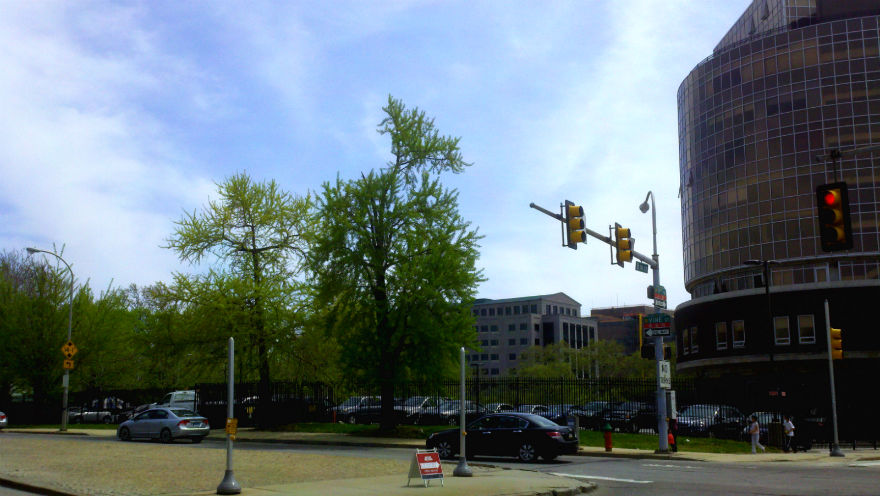 Vine Street side of the lot.